Case #1.
R.R. is a 53-year-old male CEO of an advertising agency who underwent resection of a right, 3.5 mm acoustic neuroma in 3/86. The facial nerve was reported to be intact post-operatively. The patient experienced complete right facial paralysis which persisted until 15 months post-op, at which time facial neuromuscular retraining was initiated. Initial evaluation revealed a flaccid paralysis with decreased resting tone, eye closure (medial and lateral tarsorrhaphies had been performed), volitional and spontaneous facial movements. Trace movement was observed in the right cheek musculature. (Figures 4, A-D)

Initial clinic visit was 4 days (total 12 hours) during which time evaluation was completed and the home program was developed. Surface EMG feedback was utilized to evaluate and train minimal, symmetrical facial movements. Clinic treatment sessions (3-4 hours in duration) were conducted approximately every 8 weeks during the first year, quarterly during the second year and only twice during the third year of treatment.

During the course of treatment, gradual increases occurred in excursion of movement. The patient developed minimal synkinesis during year two. During year three, spontaneous occurrence of new motor patterns was noted. Eye closure had improved sufficiently to partially reverse the tarsorrhaphies. On average, voluntary movements increased from 10% to 80% (Figures 4, E-H).

In a follow up meeting two years after completing treatment, the patient and his wife felt that function continued to improve although he no longer practiced the exercises. The patient was extremely motivated and compliant with the daily home program throughout the entire three-year course of neuromuscular retraining and was extremely pleased with the overall result. 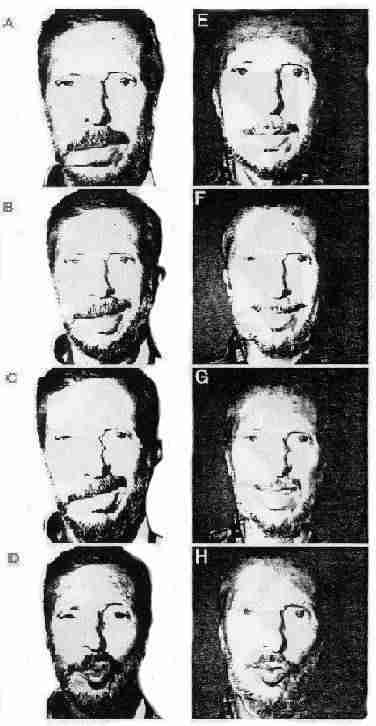 The home program consisted of small selective movements practiced with inhibition of synkinesis. She attended clinic sessions once a month for the first six months and demonstrated a significant reduction in synkinesis during that time (Figures 5, E-H). Clinic visits decreased to once every three months with continued good compliance. The entire course of neuromuscular retraining lasted two years with improvements noted in volitional and spontaneous excursion of movement. The patient continued to demonstrate mild synkinesis of orbicularis oculi during broad, spontaneous laughter. She was extremely motivated and compliant with the home program and was pleased with the treatment outcome.

Case #3
L.C., is a bright and motivated 8-year-old female with a history of congenital asymmetric crying facies. She was referred by a plastic surgeon for neuromuscular retraining before considering an invasive procedure. Her parents reported concern that the patient was being teased by classmates about her “crooked smile”. During the initial two-day treatment session, evaluation and patient education were completed.

Initial evaluation revealed all facial muscle groups were functioning within normal limits, with the exception of the left lip depressors in which no activity was noted. The patient demonstrated an asymmetrical smile with relative hyperactivity of the contralateral depressors (Figure 6A). The goal of treatment was to achieve a symmetrical smile. Because the patient lacked depressors on the ipsilateral side, treatment was designed to inhibit the relative overactivity of the contralateral depressors in order to achieve symmetry. Surface EMG feedback was used to compare the ratio of zygomatic to depressor activity bilaterally during smile.

Initial sEMG readings demonstrated relative hyperactivity of the contralateral (right) depressors (Figure 6C). The patient was instructed to attempt to reduce the depressor activity in the next trial (Figure 6D). During the following 30 minutes, the patient used sEMG feedback to improve her facial responses. She succeeded in inhibiting the contralateral depressor activity to a level at which it was symmetrical with the affected side (Figure 6E). This level of sEMG activity correlated with a visible, symmetrical smile (Figure 6B). The patient learned to produce the desired response using mirror feedback and then using only proprioceptive feedback. Her home program consisted of producing slow, symmetrical movements with and without the mirror, with her parents providing additional feedback initially. In a follow-up telephone conversation 18 months later, the parents reported generalization of the new movement pattern to outside activities about 90% of the time. The only time they noticed the “old” pattern was when the patient cried. The patient did not return for additional treatment and surgery was not performed.